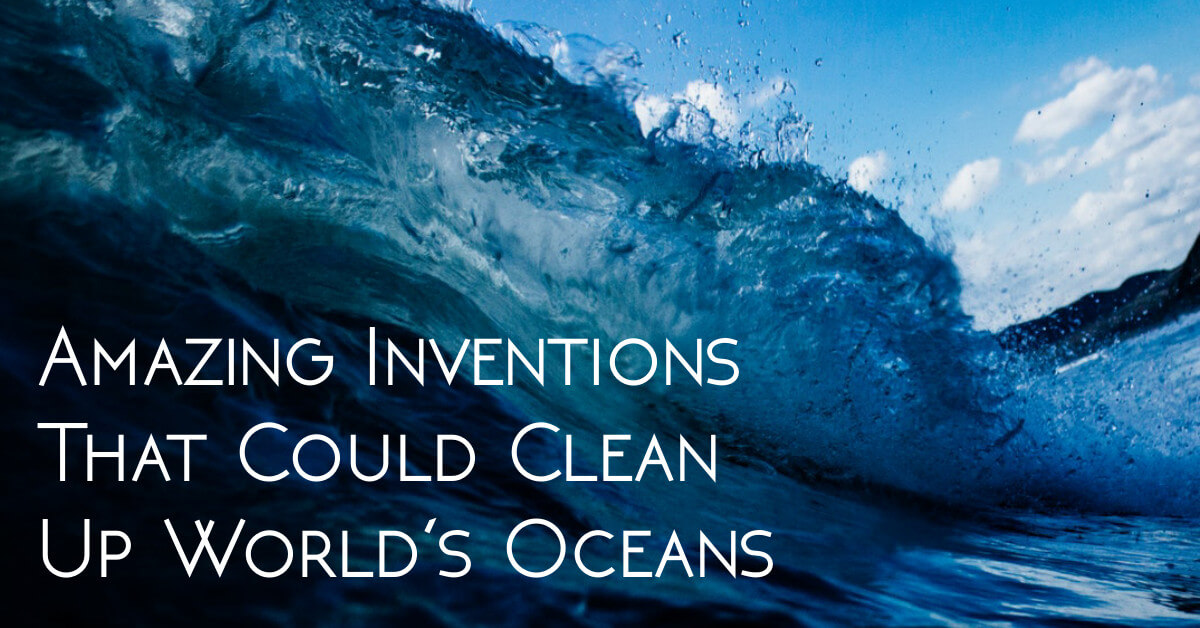 4 Amazing Inventions That Could Clean Up World’s Oceans

When you really sit down to think about it, it’s amazing that any of us are here on this planet together.

The chance of it happening was 1 in a huge number that most won’t even be able to say without taking a breath, and yet, humans are doing so many things that are contributing to the death of the planet.

We all live on this floating sphere we call home, and that means we should all be more concerned with how we care for it and preserve it.

We might not be here to see the total destruction of the world, but our relatives may be.Something that really needs to be taken more seriously, is the ocean. Surfing, sailing, swimming – we’ve all done it at some point.

We’ve all lain on the sand and gazed out at the crystal clear blue water, but many don’t give a thought to what is actually floating in there.

The truth is, we’re experiencing an environmental crisis that is ruining our oceans and killing marine and sea life every day.

A new study has reported that there will be more plastic in the ocean than fish by 2050 unless we start taking action now.

8 million tons of plastic enters our ocean every year. One particularly bad area, the Great Pacific Garbage Patch, is a semi dissolved island of waste TWICE the size of France This island is full of plastic that was thrown away.

Plastic is permanent and indestructible, so although you think you’ve thrown it away, you haven’t. It doesn’t go away. It sticks around for years and chokes, harms, and kills our sea life.

300 millions tonnes of plastic is being produced every year. This is the equivalent of the combined weight of all the adult humans on the planet.

A third of this ends up in the ocean. Luckily, people are starting to wake up to the damage we are doing to our oceans and the planet.

The following 4 inventions could actually help to clean up the world’s oceans and undo some of the damage.

20 year old Dutch entrepreneur Boyan Slat is one person who has realised that enough is enough. He has created a system that passively helps to clean up plastic pollution from the world’s oceans.

Up until this point, the only idea many could come up with was to send out huge trips to look for pieces of plastic. However, this system reduces clean up time from taking MILLENIA to just YEARS.

The system is driven by ocean currents, where plastic concentrates itself in a collection zone. This means that rather than people collecting plastic by moving through the ocean, the ocean collects the plastic as it ebbs and flows.

Currently working on getting out a prototype, Boyan Slat is leading a team of 100 scientists and engineers. They believe that this invention is a viable method that will clean up the Great Pacific Garbage Patch in 10 years time.

Having accumulated 2 million dollars of Crowdfunding, it shouldn’t be long before the prototype is released. The system spans 2000 metres and will be the longest floating structure ever deployed in the ocean.

It’ll be operational for 2 years minimum.

A group of 3 British friends came up with the idea for the SeaVax after discussing environmentally sustainable ideas to clean up the ocean.

This invention can suck up 22 million kgs of plastic per year – with the name inspired by that of a vacuum cleaner. This giant ocean vacuum cleaner can suck up all sizes of rubbish, which is then ground down and stored in the tank of the SeaVax.

The SeaVax is solar and wind powered, as well as self driving. However, it has sensors that help to separate rubbish from marine and bird life. We have one ship ready to go, but funding is needed to get more than one out there.

Avid surfers came up with the SeaBin, a simple yet brilliant invention that helps to suck pollution right out of the water.

The two Australian surfers that came up with this idea spent so much time in the water that they realised how important the clean up is.

The system is a bucket with a pump and water filtration system that is designed to suck debris from any dock or marina. There’s also an optional oil-water separator system that will pull oil out of the ocean too, and give out cleaner water through the other side.

The system will remove plastics, paper, fuel, oils, and detergent from the water to create a cleaner environment for sea and marine life.

The prototype is still being developed, but a small number of Seabins have already been installed at marinas all over the world. You can find some of them in San Diego and Finland.

The product should go on sale later this year.

4. Plaxx: A Technology That Turns Plastic Waste Into Oil

A recycling company have teamed up with a group of engineers to develop technology that helps to turn plastic products into oil.

Adrian Griffiths from the British company Recycling Technologies is currently using a machine the size of a tennis court in a trash processing center west of London to break down a variety of plastic products. This includes cling film and electronics, turning them into usable materials or energy-producing oil.

The machine works by heating up rubbish to 932 degrees Fahrenheit, which then melts it into a vapor. Once it has cooled it can be used to create 1 of 3 different materials:  a fuel that can be sold to petrochemical companies, a wax-like substance that’s similar to what ship engines burn, or a brown wax that can be used for shoe polish or cosmetics.

This technique actually has a name already; pyrolysis, which breaks down the plastics into a basic molecule. This machine could soon be put to use in our oceans, although the prototype is still being tested and tweaked by engineers.

We can change our ocean/plastic situation, we just all have to commit and take drastic action sooner rather than later.

Avoid plastic and become more mindful of how you dispose of your waste!